Created 30-Mar-10
Modified 2-Apr-10
Visitors 8
7 photos
Ash: There are several species of Ash suitable for the Calgary climate all sharing characteristics common to all Ash trees. They are hardy and make excellent shade trees but the one knock against them is they are out of leaf longer than in leaf. On one hand this makes them a good shade tree because they let the sun in until it’s hot and then drop their leaves again to let the sun again at the end of the season but on the other hand we typically want trees to have leaves as long as possible

Size and Characteristics:
Green Ash (Fraxinus pennsylvanica) matures at 10m (32’) wide by 15m (50’) tall. They leaf out late, usually mid May, with a large compound leaf and then are one of the first to change to their golden fall colors usually in mid-late September depending on the frosts. The bark is rough light tan/ brown in color.

Manchurian Ash(Franxinus mandshurica) matures at 5m (16’) wide by 10m (32’) tall. They have a more lance shaped leaf giving them a more ‘ferny’ appearance. Due to their smaller mature size they are popular with developers who like to plant them in the tiny spaces between parking lots etc. where they don’t exactly thrive.

Pests and Diseases: In 2006 Manchurian Ash across Calgary got a bad infestation of a type of woolly aphid and many young trees weren’t able to compete and perished. This type of thing happens from time to time and it is too early to say whether it is cause for alarm. In general Ash in Calgary are trouble free.
© Clayton Ditzler 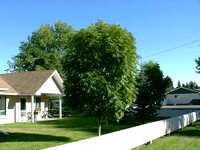 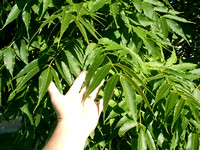