Google maps says “37 minutes to the destination” – on dry roads mind you, but that’s some close hiking. The roads were a bit slippery but the new snow also adorned the landscape with very photogenic potential and fresh animal tracks. Wolf, coyote, moose, deer, rabbit, squirrel were among those identified. We did see a young bull moose and numerous deer but none of the canines. The first leg is via well roads and then fresh logging activity but views improved as we first climbed Jack's hill and then descended thru deep snow on the north side before climbing Jill's hill for an early lunch break in the sun. For a day with a forecast 75% cloud cover we had quite a little sun. At the trailhead we met two ranchers who were trying to round up the last of their cows/calves and they were interested in the wolves. Apparently they are currently trapping after having some high losses to predation this year. Upwards of 60 head unaccounted for and a wolf compensation claim can only be made with evidence – so only a couple were covered by compensation. A difficult balance with bears and cougar also in the mix potentially taking a few. A shorter day but with a start around -16C a half day was just right.
© Clayton Ditzler 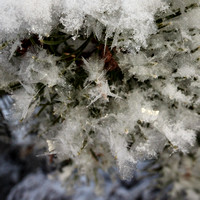 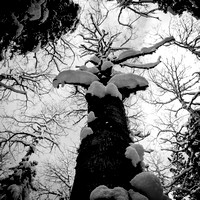