Mildest Snowpig on record. Peter scoped out a general area and even flagged a few potential campsites on an earlier trip and as it happens a shorter approach worked out just fine because (in the parlance of hockey) we had to deal with a “lower body injury” situation. No quarter was given in the eating and firewood department so it was all good for everyone. After settling on a campsite and scoping out a hole in the frozen river for water we marvelled in the warm sun at our luck, in no rush to gather wood, clear a kitchen/firepit and other day one chores.

Missing out on Konrad’s “arriving at camp beer” was a possibility as he is now a tree hugging granola munching kelp kissing islander – Peter surprised us with some ice cold Wraspberry beers that went down well on what was already a warm day. Cheers! Who’s better than us? There was quite a reach down to the river water so I repurposed one of the cans into a dipper so we didn’t even have to chop the ice much to have fast running pure clean water to enjoy.

We spent the day gathering wood and other chores. I felled a big dead spruce that David counted 84 rings. About a thirty footer with a 12” butt, it was a job to process and made some nice end logs. I rode David pretty hard for his preference to harvest aspen – a significantly inferior firewood, even going so far as to refuse to process it when it was back at camp and get annoyed with it sharing the stack with the kings wood. It all burns in the end! If you have no other choice I guess.

Our combined main meal was devised on a fall hike not far from here, up to Bluerock Knob. Pork ribs!! Peter did his magic with the par-cooking, seasoning and foil pack ready for the fire. I made a foil side of sweet onions, carrot, brussel sprouts with lots of butter and bacon. Can’t have it burning now. My mom had given me a pie (raspberry, blackberry, blueberry) a few days before departure so we got to play a round of “What’s in the box” – a game that David in particular thoroughly enjoys. Warmed in the fire and served up with a shovel, it was well received. Other snacks and the usual rounds of Rum, whiskey, sortilege, apple liquor, and gingerbread screech, the last two David had held over from his Christmas bounty. The evening around the fire was mild and I don’t think it even froze overnight.

Day 2 we had our coffee etc and then decided on a foray up the Sheep for our side-trip. Travel on the frozen river was easy and safe with the ice very thick. Some frozen waterfalls and exposed banks gave us some things to explore. My friend Ryan saw my photo of the frozen falls on FB and went to climb it. “they probably have names, but we decided the little ones upstream were ewephoria and the big one was ewetopia 😂” – nice names, hey David!!

Climbing up onto a grassy bench provided a spot for a sunny snack lunch. Returning to camp we processed a “bit” more wood before tucking into another night of food. I made a rabbit approved version of kraft dinner and downed a couple toasted smokies along with nan bread with melted cheese al-la hot fire oven method that was certainly a win. I was almost too full to continue but after a break I was able to tuck into Peters treat of some sweet braided bread his mom had provided and I experimented with some cinnamon bun dough. I think that would have worked better if I’d taken more time with it and been hungrier. Lol. Some of my food had to make the return trip rejected – so sad. A dark foray out onto the river to see the stars was quite leisurely as usually leaving the fire for such things is a painfully cold ordeal.

Day 3 I was up first by an hour or so breaking camp and drinking coffee on an idyllic sunny calm morning. As it was chillier after a clear night I added some kindling to the fire and we enjoyed some toasted bacon with our breakfast. A frozen chunk of ice in my pot served as a funky shot glass for a final round of sortilege before packing up and heading out.

Snowpig Classic 2021 will be a tough one to top but I’m sure we’ll give it a shot!
© Clayton Ditzler 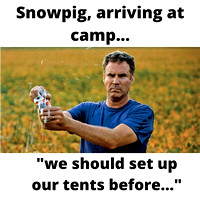 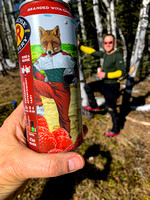 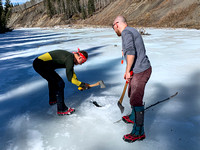 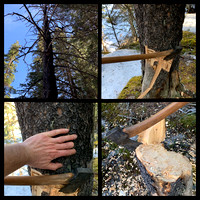 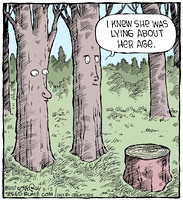 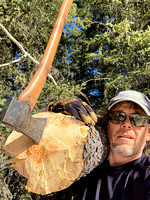 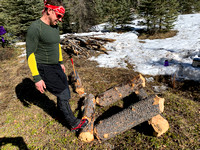 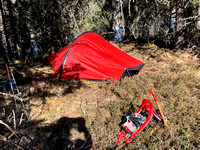 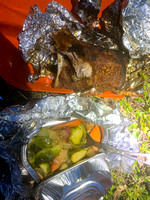 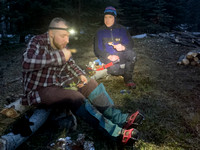 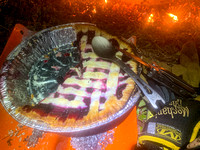 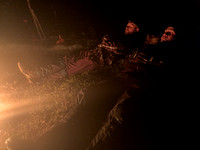 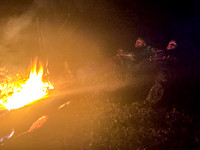 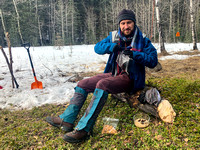