Throughout this scramble the words of a fellow scrambler from his trip report kept repeating in my head “Do not underestimate the effort required for these peaks”.

After a half day at work Saturday, I drove up via Innisfail and got groceries in Rocky Mountain House before joining Peter and David who were already camped at Thompson Creek Campground. Saturday afternoon and there were an amazing number of people in the Bighorn area – despite that I got a $29 campsite right across from Pete and David. A gravel pad, firepit, table, pit toilet and 12 pieces of damp aspen firewood. Steal of a deal!

After a slip off of his slack line, Peter had cut his foot. That and the possibility of less than ideal weather the next day had us pondering what to do. The system that had just moved off had left some snow and we needed a clear day and mostly dry conditions to attempt this huge day. It worked out for the best though (foot and weather) and in the pre-dawn light we headed up Thompson creek on the only bit of good trail we would see all day. After the ‘family hike to the falls’ stretch we were soon log hopping and slipping up steep dirt trails thru pine and aspen forest. A big black bear at a range of 15m gave us a little adrenaline rush – we were hiking right thru his berry patch afterall. After some very steep pine forest we negotiated a bunch of jumbled timber at the base of an avy run out and made our way into the drainage between the massive cliff face of Mt Cline and Resolute. At a water break I carried on ahead thru a field of small house to car size boulders (I’m the slow poke and didn’t need water) and I found that to be very enjoyable. We skirted it in the creekbed on the way back for greater speed as we now knew there were no obstacles in the creekbed. A long grind of a scree gully topped us at the col overlooking icefields, lakes, and jagged peaks. This view alone would be worth the trip thus far.

Turning our sites toward Resolute, the imposing summit block was relatively easily climbed via some weaknesses and scree gullies. Some ice formations from the recent snow lended themselves well to photography. Soon we were on top with only the higher Mt Cline beside us impeding long views in all directions. A Cluff bar snack and we were soon onwards down from the summit block and then around it toward Lioness. Strong winds along this ridge traverse had us ensconced in hoods and hardshells as we looked for fossils on the ridge. Peter had the good fortune to find a little trilobite type fossil! Loose rock was all the challenge that the Lioness presented where we enjoyed more views and then a snack in the lee side before deciding we’d better make some tracks. We had no desire to hike thru the berry patch in the dark! The route down was at times tedious on the loose rock, then steep trails with logs etc. A slip landed me with a handful of rose or currant spines – fun to dig out in the days to come. We didn’t see the bear again and arrived back at camp at last light for beers, and smokies roasted over the fire. A physically challenging, but most rewarding day to a seldom visited peak.
© Clayton Ditzler 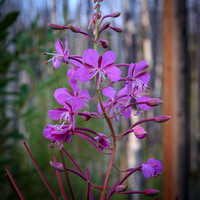 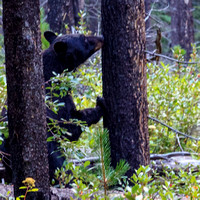