Peter had this one on his radar and when the weather looked to be better than expected we decided to do this one. Work week was pretty full so reading one trip report online and a few moments in Google Earth was the sum of my research although I have spied this area from previous trips. Peter had a copy of the government topo, I had the GPS to get a grid reference, and also using MapsMe on the phone – we found the trailhead!

Not far into the trip we took a right where we should have taken a left and had an adventure. Some extra gains and losses on the day and some light bushwhacking ensued. “Better at the start of the day than the end” I told Peter later. The South peak was gained with only some minor gropple and a few spits of rain as we grovelled up the lichen covered talus west slopes. From there we had a great ridgewalk along the one km or so long connecting saddle ridge.

The weather was circling and in the gap between a few booms of thunder threatened to ground us from the North peak. Thankfully that system dissolved and we able to summit the windy North Peak before returning to a little bump on the return where we had a relaxing lengthy lunch with even some sunshine. Too bad I forgot my sunglasses – I was reminded of often.

The return trip was on trail and quite enjoyable. A discussion of recent events with “Black Lives Matter” etc made the descent go by quickly.

After parting (still not car-pooling thanks to Covid practicalities) I went further up the road to the Oldman River falls before returning home via miles of gravel as I went all the way up the 40 to Highwood house before hitting pavement again.
© Clayton Ditzler 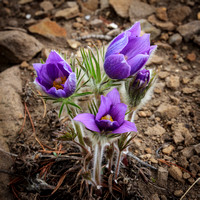 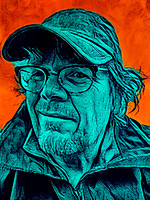